The Lives They Left Behind: Suitcases from a State Hospital Attic por Darby Penney 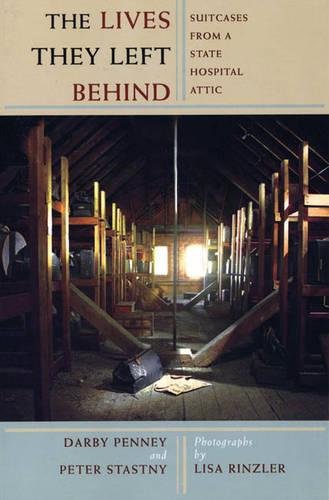 Darby Penney con The Lives They Left Behind: Suitcases from a State Hospital Attic

"The Lives They Left Behind is a deeply moving testament to the human side of mental illness, and of the narrow margin which so often separates the sane from the mad. It is a remarkable portrait, too, of the life of a psychiatric asylum--the sort of community in which, for better and for worse, hundreds of thousands of people lived out their lives. Darby Penney and Peter Stastny's careful historical (almost archaeological) and biographical reconstructions give us unique insight into these lives which would otherwise be lost and, indeed, unimaginable to the rest of us."-Oliver Sacks, M.D., Professor of Neurology and Psychiatry, Columbia University Medical Center, Columbia University Artist, and author of Musicophilia "The haunting thing about the suitcase owners is that it's so easy to identify with them."-Newsweek "In their poignant detail the items helped rescue these individuals from the dark sprawl of anonymity."-The New York Times "The authors spent 10 years piecing together ...the lives these patients lived before they were nightmarishly stripped of their identities." -Newsday More than four hundred abandoned suitcases filled with patients' belongings were found when Willard Psychiatric Center closed in 1995 after 125 years of operation. They are skillfully examined here and compared to the written record to create a moving-and devastating-group portrait of twentieth-century American psychiatric care.